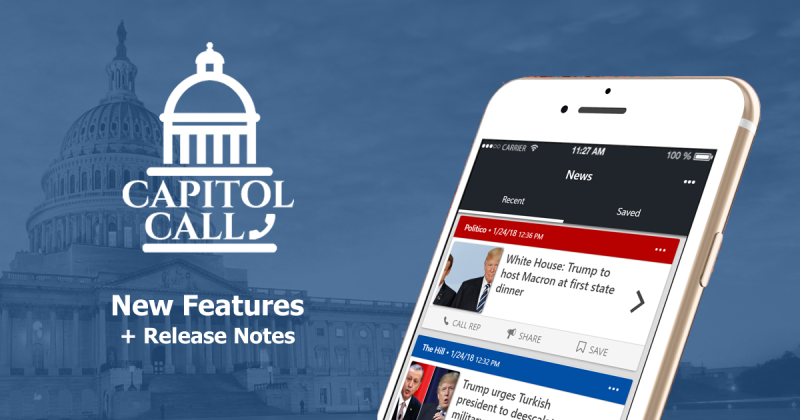 Recognized as one of the top influencers of app culture in 2017, the app also adds representative scorecards and expanded calls to action.

SEATTLE, Jan. 28, 2018 - Capitol Call, a non-partisan political activism app that takes the guesswork out of calling Congress and puts lobbying power in the hands of the people, has announced a series of major feature enhancements as it celebrates its one-year anniversary. In a continuing effort to increase political engagement and activism, the app has added new features to help users become more informed, stay motivated to act and have a convenient method to lobby their lawmakers for change.

Building on a successful first year, which includes being named as one of 20 influencers in Apple's 2017 App Culture Highlights and App of the Day, Seattle-based entrepreneur and founder Brandon Peterson, was inspired to create the app during last year's Women's March.

"When I started this project last year, I really didn't know where it would go. I was inspired to action by the excitement of the Women's March - but I really didn't appreciate the power that one voice can have," said Peterson. "I'm not 'somebody.' I don't have a 'following,' or a position of authority, or a strong connection to the activism community. But I decided to take action. If I take anything from this experience it's that you don't have to be somebody to do something."

"Many of the new features in this release, and those to follow, speak to that idea," Peterson continued. "Informing people so they can feel confidence and gain perspective. Guiding people so they have direction and purpose. Empowering people to amplify their voices in Washington and in their communities. We don't have to be 'somebody' to get informed, pick up the phone, call our reps or cast our ballots."

Capitol Call is available to download for free in the Apple and Google Play stores. Download the app and learn more at: http://www.capitolcall.org.

For more details on the app enhancements visit: http://outreach.capitolcall.org/whatsnewstocapitolcall

Capitol Call is the non-partisan mobile app that takes the guesswork out of calling Congress. Currently in the hands of 30,000 citizens, the app uses GPS to automatically determine the user's representatives and provides sample phone scripts, allowing users to take immediate action. A true bootstrap startup, founder Brandon Peterson and his small team work nights and weekends, putting in personal time and dollars, to make it easier to track the causes you care about and let your voice be heard. Capitol Call was developed by Object Studio in Seattle, Washington USA. To learn more visit, www.capitolcall.org.